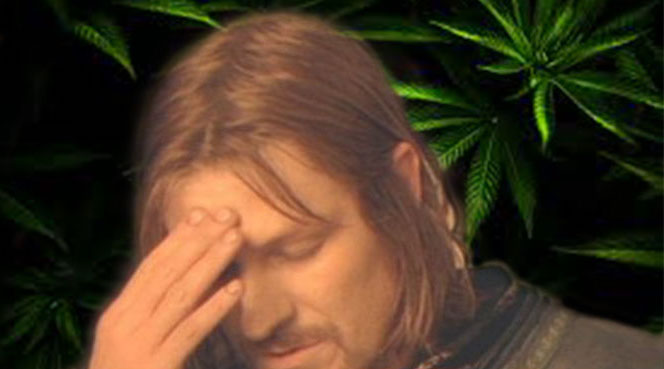 Every stoner has a pet peeve, so we put together some of the top pet peeves that most stoners experience.

Lipstick Stain. Nobody likes it when they get the joint or bong back and find lipstick/chapstick on the rim of the bong or the filter. It’s gross and unhygienic, when you go to pass it back then just wipe it off.

Joint Hogger. When somebody who has the joint is telling a long ass story, but isn’t smoking it, yeah, don’t do that. As well as those smokers who don’t know how long to hold the joint for, so they just smoke it like it’s their cigarette, then by the time it reaches you, you’re smoking a filter. Just be considerate.

Mandatory Credit: Photo by Eduardo Verdugo/AP/REX/Shutterstock (6738663a)
A man smokes marijuana inside his apartment where he uses a hydroponics system to grow his weed in Mexico City. The Mexican government has awarded,, four people the first permits allowing growing and possession of marijuana for personal use. The government’s medical protection agency says the permits apply only to the four plaintiffs who won a November Supreme Court ruling. The permits don’t allow smoking marijuana in the presence of children, or anyone who hasn’t given their consent
Mexico Marijuana, Mexico City, Mexico

The Cycle Cutter. The blunt is coming your way after doing another cycle, but all of a sudden, a late party goer arrives and cuts right in front of you to join the cycle. When you’re late, that’s your mistake; the blunt is lit, the cycle has begun, and it’s my turn! The cycle goes one of 2 ways; clockwise and anticlockwise, yet people tend to forget the order and manage to still mess it up.

Filter Wetter. Absolutely nobody likes a wet filter coming back to them. It’s so nasty; people will lick their lips, take a puff, and pass over a slobbery joint. How do you smoke that without being disgusted? Sometimes having dry mouth is a positive, just don’t lick your lips before taking your puff, it gets our fingers and lips wet too. Another way people get the filter wet is by putting half the filter in their mouth; don’t do that! Just remember, just the tip!

Slobbery Blunt Roller. Saliva is definitely key when it comes to rolling a blunt, but you don’t need to drown it. A nice crispy, yet slightly moist blunt wrap is the best, so just be aware of that next time you lick a blunt shut.

Not Cornering the Bowl. Cornering the bowl means when you light the bud in your bowl, you only light a corner or strip or the bud instead of burning through the whole bowl; next person in line will be take another corner, and so on. When people don’t corner the bowl and just light the whole bowl, they waste the majority of the bud and the next person in line to smoke will suffer from the remains in that bowl.

The Newbie. They’re unpredictable. New smokers could get paranoid, ash wrong, smoke wrong, get loud, get obnoxious, and basically anything. Nothing is worse than smoking with a first timer because you never know what you’re going to get.

Being the only weed supplier. If you’re going to join a friends smoking session, then the least you could do is bring some more weed to supply. It gets tiring and expensive being the only supplier in the group. Don’t take advantage of this friend!

Overall, when you smoke up with anybody, the main rule is to just be considerate of others! Sharing is caring and dry lips are a plus sometimes. What are some of your stoner pet peeves?